Mr Joyce said in an interview on Wednesday that country airline Rex launching flights between Sydney and Melbourne in March would spark fierce competition on the busy route.

“My personal view is that this market has never sustained three airline groups and it probably won’t into the future,” he told an online event hosted by Reuters.

Labor is tipped to win Queensland’s Saturday election but may need to rely on minor parties to form the next government, a final poll reveals.

The final Newspoll of the campaign, published in The Weekend Australian newspaper, reveals Labor holds a two-preferred party lead over the LNP, 51.5 per cent to 48.5 per cent.

Labor’s primary vote of 37 per cent has just inched out the LNP’s vote of 36 per cent but the numbers are an improvement from results at the 2017 election.

Both parties are poised to snatch seats from each other in marginal seats as Queenslanders cast their votes today.

LNP Leader Deb Frecklington has already cast her vote in Townsville – a marginal Labor seat that could be a decider in the final count.

47 seats are needed to form a majority government.

Some seats in Labor’s Brisbane heartland, including Grace Grace’s seat of McConnel and former Deputy Premier Jackie Trad’s South Brisbane seat, have come under threat of falling to the Greens.

The LNP is at risk of losing Pumicestone, Currumbin and Caloundra.

Meanwhile, support has fallen for Pauline Hanson’s One Nation Party, down to 10 per cent from her 2017 results of 13.7 per cent.

Both party leaders have continued to deny they will do any deals to form a minority government.

At the final leader’s debate, Ms Palaszczuk asked voters to stick with “stability” as she continued her attack on Ms Frecklington for wanting the state borders open.

“Queenslanders can trust me because every day I am keeping them safe and doing everything I possibly can to ensure that we do not see what has happened in other parts of the world and what happened in Victoria,” Ms Palaszczuk said.

“That’s what drives me and people know me.”


More than 100 footy fans turned out in Bundaberg to welcome the prestigious AFL premiership cup.

The so-called ‘holy grail’ is touring regional Queensland on its way to the Gabba for the historic 2020 grand final on October 24.

Barry Gibson is the AFL’s football operations manager in Queensland and he has the task of ensuring the cup has a safe journey.

He even sleeps with the cup.

“My job is to make sure it gets to Brisbane in once piece and there are so many hands on it, it’s a great experience,” he said.

“It was magnificent, and we didn’t expect to see that many people here at Buss Park in Bundaberg and to see the smiles and joy on faces was amazing.”

Bundaberg was a late inclusion for the tour after a written request to AFL boss Gillon McLachlan direct from Mayor Jack Dempsey asking for the rum city to be given a chance to host the cup.

“It’s about people power. I’m so glad we’ve got this great opportunity and to see so many supporting the ‘holy grail’ really warms your heart,” Cr Dempsey said.

Bundaberg is considered rugby league heartland, but the AFL hopes visits like this will lift grassroots participation in the game. Cr Dempsey is lobbying for better facilities.

“We are looking to improve infrastructure for AFL and cricket.”

A word from the maker

Vincent Formosa has personally handcrafted the premiership cup each year since 1986.

Each one takes up to 120 hours to make and the main component is brass.

“We try and make them the same, but they are never identical,” he said.

“We silver plate the outside and we put 24-carat gold plating on the inside and the oak leaves are also made of gold.”

Mr Formosa, a Melbourne resident, said he was thankful that the AFL season was resurrected after the coronavirus shutdown and that Queensland secured the grand final.

“We are in lockdown and if it wasn’t for the AFL and the Queensland Government it would be so frustrating. The game is keeping us going to be honest.”

The first-ever cup was presented to Demons captain Ron Barassi in 1959. Previously teams had been awarded flags.

While the cup visited the beach at Cape Hillsborough near Mackay earlier this week, a kangaroo named Molly was presented with four jerseys. The one it hopped towards was Geelong Cats.

Only time will tell if the roo has correctly predicted the premiership winning team for 2020.

Next stops for the cup will be Toowoomba, Gold Coast and Sunshine Coast before grand final week begins in Brisbane.


Dexus chief executive Darren Steinberg said demand for office space would remain soft for the next 12-18 months, but once the economy showed signs of an upturn, he predicted people would want to return to the office.

“The office market has slowed but it’s not dead and as the economy improves we expect to see a rise in white-collar employment and people wanting to come back to the office,” Mr Steinberg said.

“However, with Australia in a recession, we are preparing for subdued tenant demand and increased
vacancy levels in our core office markets. In this environment we remain focused on maintaining high portfolio occupancy.”

“We will also make decisions that set the group up to perform over the long term. We will selectively recycle assets, which may result in short-term earnings dilution but will enable us to reinvest into opportunities that we believe will drive stronger investor returns over the next decade.”

Photo:
The forecasts say up to 270,000 Victorians could lose their jobs. (ABC News: Margaret Burin)

More than a quarter of a million jobs could be lost in Victoria due to the coronavirus pandemic, according to modelling from the state’s Department of Treasury and Finance.

Treasury forecasts 270,000 Victorians could be out of work as a result of the economic and health crisis, with Victoria’s unemployment rate peaking as high as 11 per cent in the September quarter, more than double the current rate.

Victoria’s gross state product may also fall by an unprecedented 14 per cent relative to previous forecasts.

The property market, a major source of government revenue, will also be hit, with prices predicted to fall by up to 9 per cent by the end of the year.

The modelling assumes coronavirus restrictions will remain in place for six months.

September quarter expected to be the worst

“The modelling will enable the Government to plan and deliver measures to support workers and businesses, as well as the state’s economic recovery after the pandemic,” he said.

Stay up-to-date on the coronavirus outbreak

The State Government is preparing to borrow an extra $24.5 billion to set up an emergency fund it can draw down on, to help the state recover from the pandemic over the next two years.

The money will add to the state’s debt, which is believed to be between $50-$70 billion.

Treasurer Tim Pallas said the figures showed the impact of the coronavirus would get significantly worse before it got better and the recovery would be longer than first expected.

“We’re expecting the September quarter of this year will be where most of the damage to jobs and economic growth will occur and we will see those numbers start to improve as we go forward,” Mr Pallas said.

“The modelling paints a bleak and devastating picture for our economy which is unprecedented in our lifetimes.

“But the one piece of good news is Victoria does have the capacity to help those who need it most.”

Your questions on coronavirus answered:

Mr Pallas said the emergency fund would be “vital” in ensuring Victoria got to the other side of the pandemic.

“I expect the most adverse impacts of this pandemic will be upon us before the end of this year and a substantial amount of the recovery will occur in 2021,” he said.

“But it will take years for us to get to the position that we were previously in prior to the onset of the pandemic.”

What the experts are saying about coronavirus:

Victoria’s budget was already under pressure before the crisis due a slowing property market and rising wage costs.

MPs will return to State Parliament for a special one-day sitting on Thursday to vote on a raft of law changes including allowing judge-only trials, the suspension of bail reporting conditions as well as the $24.5b emergency fund and supply bills.

What you need to know about coronavirus:


The Australian government’s economic lifeline will “help a great deal” in the recovery phase according to IMF Division Chief for Australia Harald Finger.

“It will not help as much immediately… while everything is under lockdown [and] people are not leaving the house much but it will help a great deal when people start spending again,” Mr Finger told SBS News.

Australia is expected to suffer its biggest economic blow since the Great Depression of the 1930s, with unemployment to remain high for at least two years beyond the coronavirus pandemic.

The International Monetary Fund expects the Australian economy to shrink by 6.7 per cent this year, more than double the global rate.

“On the economic front for Australia this will be the first recession in almost 30 years. It’s a fairly steep decline,” Mr Finger said.

“But keep in mind this is very high level of uncertainty… given we don’t know how the trajectory for the virus will play out in Australia and globally,” he added.

Australia’s performance is expected to be among the bottom third of the world’s top 20 economies, with countries such as the United States, Britain and South Korea all tipped to fare better.

The IMF predicts a partial rebound for the world economy in 2021, with an overall 5.8 per cent growth rate.

But the fund’s forecasts are marked by “extreme uncertainty” and the outcomes could be far worse. 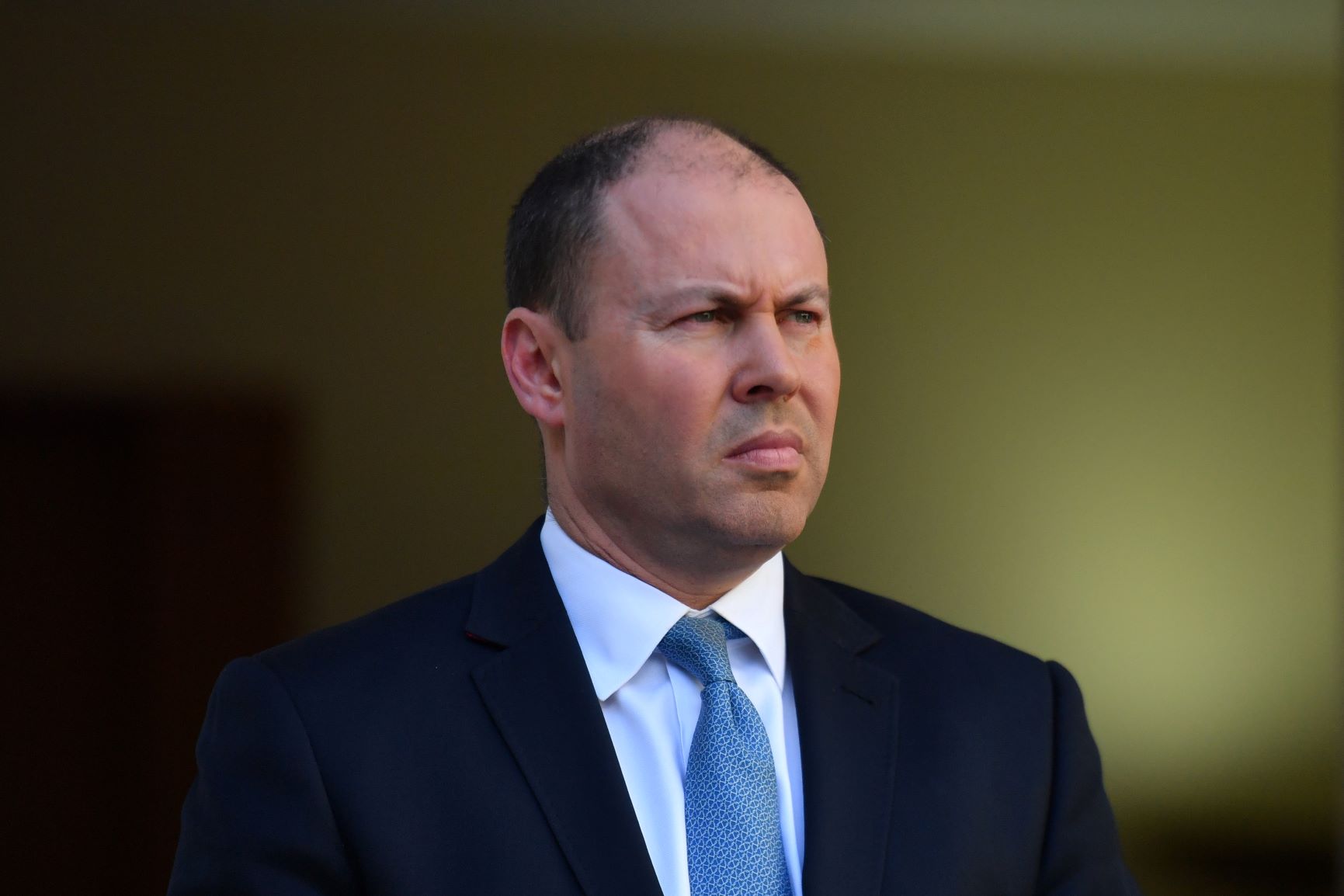 Treasurer Josh Frydenberg said the government had taken decisive action to protect Australians and the economy from the effects of coronavirus.

He also noted the reserve bank had responded quickly to worsening risk sentiment by injecting $90 billion into the financial system to support small and medium businesses.

“Australia approaches this crisis from a position of economic strength,” Mr Frydenberg said.

“The federal budget returned to balance for the first time in 11 years and Australia’s debt to GDP is about a quarter of what it is in the United States or United Kingdom, and about one seventh of what it is in Japan.”

“Expectations of persistently high unemployment is a sobering reminder of the devastating economic impacts of this diabolical health crisis, and highlights the need to protect as many jobs as possible now,” he said.

“When unemployment spikes in the next few months, remember hundreds of thousands of job losses could have been prevented if the treasurer picked up his pen and included more workers currently left out and left behind.”

People in Australia must stay at least 1.5 metres away from others and gatherings are limited to two people unless you are with your family or household.

If you believe you may have contracted the virus, call your doctor (don’t visit) or contact the national Coronavirus Health Information Hotline on 1800 020 080.

If you are struggling to breathe or experiencing a medical emergency, call 000.

SBS is committed to informing Australia’s diverse communities about the latest COVID-19 developments. News and information is available in 63 languages at sbs.com.au/coronavirus