To protect the health and safety of the NASA workforce as the nation responds to coronavirus (COVID-19), agency leadership recently completed the first assessment of work underway across all missions, projects, and programs. The goal was to identify tasks that can be done remotely by employees at home, mission-essential work that must be performed on-site, and on-site work that will be paused.

“We are going to take care of our people. That’s our first priority,” said NASA Administrator Jim Bridenstine. “Technology allows us to do a lot of what we need to do remotely, but, where hands-on work is required, it is difficult or impossible to comply with CDC guidelines while processing spaceflight hardware, and where we can’t safely do that we’re going to have to suspend work and focus on the mission critical activities.”

The agency has defined mission-essential work as that which must be performed to maintain critical mission operations to ensure the schedule of time-sensitive mission-critical launches, or work to protect life and critical infrastructure. This includes work to support America’s national security and mission-essential functions for the nation. NASA leadership will continually assess all activities as the situation evolves.

NASA’s Mars 2020 mission, which includes the Perseverance Rover and Mars Helicopter, remains a high priority for the agency, and launch and other mission preparations will continue. Much of the work is being done by employees and contractors who work remotely across the agency. Assessments by agency leadership are underway for anyone required to work in areas under restriction, such as NASA’s Jet Propulsion Laboratory in Pasadena, California, especially after the recent announcement by California’s governor.

The James Webb Space Telescope team, also in California, is suspending integration and testing operations. Decisions could be adjusted as the situation continues to unfold over the weekend and into next week. The decision was made to ensure the safety of the workforce. The observatory remains safe in its cleanroom environment.

Also in California, work continues by Lockheed Martin on X-59 NASA’s first large-scale, piloted X-plane in more than 30 years, while NASA oversight and inspections will be conducted almost exclusively virtually.

Work on the agency’s Artemis program continues with limited production of hardware and software for NASA’s Space Launch System (SLS) rocket. SLS and Orion manufacturing and testing activities at NASA’s Michoud Assembly Facility and Stennis Space Center are temporarily on hold. The Artemis 1 Orion spacecraft will be shipped from the agency’s Glenn Research Center to its Kennedy Space Center where it eventually will be attached on top of SLS for the Artemis I lunar mission. Assembly and processing work is continuing on the Artemis II Orion spacecraft at Kennedy.

Since the Human Landing System program leverages capabilities across the agency, it already functions as a virtual team to conduct engineering analysis and other work, and it has seen minimal impact from the requirement for mandatory telework. Most development work on the Gateway program continues and can be done remotely, however, any on-site activity beyond securing hardware is temporarily suspended until further notice.

All work associated with supporting International Space Station operations continues. Flight controllers are working in the Mission Control Center at Johnson Space Center in Houston, where a number of additional measures went into effect in early March to reduce the risk of exposure to the team.

Astronaut training continues, as do preparations for the launch April 9 of NASA astronaut Chris Cassidy and two Russian cosmonauts. NASA and its international and commercial partners always take steps to prevent the crew from bringing illnesses like the cold or flu to the International Space Station. As with all crewed launches, crews must stay in quarantine for two weeks before they launch. This process ensures that they aren’t sick or incubating an illness when they get to the space station and is called “health stabilization.”

Work also continues on the agency’s Commercial Crew Program, a critical element to maintaining safe operations on the International Space Station and a sustained U.S. presence on the orbiting laboratory. Commercial resupply activities and future missions also will go on as scheduled in order to keep the space station crew fully supplied and safe.

NASA also is supporting mission-essential operations for all spacecraft. This encompasses the Hubble Space Telescope and space communications network, as well as satellite missions that support the National Oceanographic and Atmospheric Administration and Department of Defense, including those that provide critical weather and GPS data.

Most of the agency remains under a Stage 3 status, with mandatory telework for all employees with limited exceptions for on-site work. Ames, Michoud, and Stennis are at Stage 4 with personnel on-site to protect life and critical infrastructure. NASA leadership continues to monitor developments regarding COVID-19 around the nation and follow the guidance from the White House Coronavirus Task Force, Centers for Disease Control and Prevention, and local and state health officials in order to keep the NASA community safe. 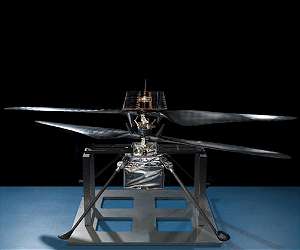 
As NASA pushes the frontiers of science and human exploration, the agency also advances technology to modernize life on Earth, including drones, self-driving cars and other innovations.

NASA’s diverse missions spur the creation and improvement of thousands of new products that make life better for people around the world. Dozens of the latest examples are featured in the newest edition of NASA’s Spinoff publication, including several from NASA’s Jet Propulsion Laboratory in Southern California, an … read more