A coronavirus economic relief bill being finalised in the US Congress will include a one-time US$3000 (AUD$5000) payment for families, US Treasury Secretary Steven Mnuchin says.

The bill will also allow the Federal Reserve to leverage up to US$4 trillion (AUD$6.9tn) of liquidity to support the nation’s economy.

Speaking in an interview on the Fox News Sunday television program, Mnuchin said the additional liquidity measures would allow the US central bank to help a broad base of US businesses to get through next 90 to 120 days.

Trump administration officials hoped to finalise the legislation on Sunday and see a vote on Monday, Mnuchin said, adding that further steps could be taken if the crisis did not abate in 10 to 12 weeks.

Mnuchin said the US economy would clearly take a hit from the virus, but should rebound once it had been contained.

“We need to get the money into the economy now. If we do that, we think we can stabilise the economy,” he said.

The virus has killed at least 325 and sickened more than 25,000 across the United States, leading governors and mayors to shut schools, businesses and many aspects of American life. 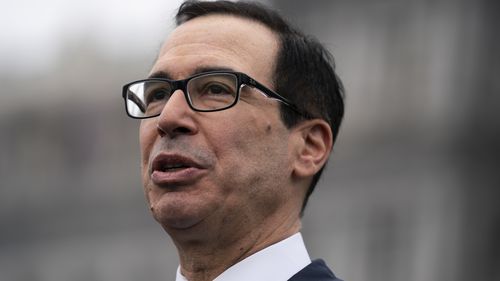